Questions raised : Did officers have a choice as to their use of lethal force once Olango took a shooting stance with a device that looked like a gun? What could they have done before it became a critical shoot/no shoot situation? Was Olango mentally ill? Should strategies have been different if  was suffering from mental illness? Should officers been wearing body cams? Should the police have released a video taken by a bystander? Should they have released it sooner? Is Olango’s criminal record relevant?

Three days after an El Cajon police officer fatally shot authorities released video of the incident his family and protesters have demanded to see. A protest far more peaceful than Thursday night followed the release of the footage. The videos were shown live over local news stations. About a dozen people collected outside police headquarters during the news conference watched the videos on their cellphones and reacted with anger as they heard the shots ring out.

Stating it was “for the sake of the well-being of the community” because of misinformation being bandied about, El Cajon police chief Jeff Davis released two videos related to the death of Alfred Olango, 38. In the first video, which lasts one minute and 37 seconds and is shot from the drive through of a fast food taco restaurant, Olango is seen backing away from Police Officer Richard Gonzalves and then moving to the side before the video goes black. In the second video, shot via cell phone by someone who was at the taco restaurant drive through, Olango is seen backing away from Gonzalves before four gunshots are heard and someone is heard screaming. This video lasts perhaps 20 seconds.

Gonzalves shot Olango and another officer applied a stun gun electronic device after responding to a call of a man behaving erratically.

Moments after Olango was shot and killed, his sister was captured in an eyewitness video as she wept and screamed at officers, saying she told authorities her brother was mentally ill. 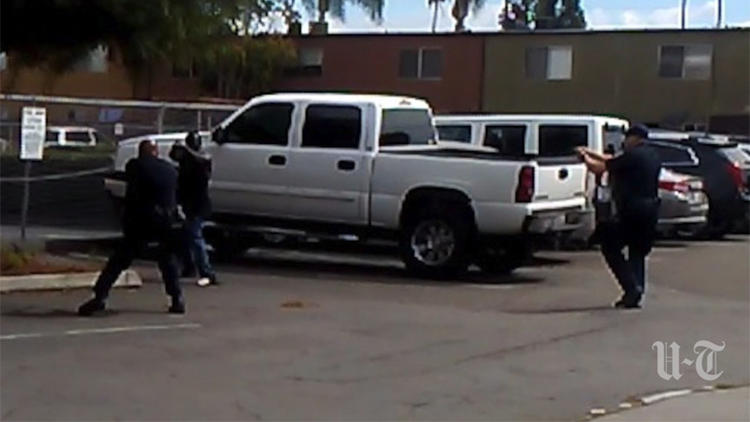 A woman f identifying herself as Olango’s sister claimed Olango suffered from mental challenges and that she called emergency responders for help but hoped someone with a psychiatric background would respond. In the video posted on YouTube (some explicit language), the man’s sister said she told officers he was sick and needed help. She said she called police three times but instead should have called a “crisis communication team.”

“Don’t you guys have a crisis communication team to talk to somebody mentally sick?” she asked an officer. “Why couldn’t you tase him? she asked officers. “Why, why, why, why?” At one point, the woman yelled, “Oh, my God, you killed my brother!” several times. “I called for help. I didn’t call you guys to kill him,” she told officers as she shrieked.

Chief Davis urged the public to let the investigation unfold before making any judgments about the shooting.

In a community meeting dealing with community unrest about the incident, El Cajon’s Mayor Bill Wells vowed a full investigation and said the FBI has joined the probe of the incident.

“The most important thing to take away from this meeting today is a tragedy occurred In El Cajon yesterday. We lost a life. Nobody wants to see the loss of a life,”  said at a Wednesday afternoon press conference.  “The family is devastated. The person who lost his life is devastated. Even the police officers involved in the shooting are devastated, and certainly the community is devastated.”

Wells also spoke of the death in personal terms. “I saw  a man who was distraught, a man who was acting out like he was in great pain. I saw him get gunned down and killed. If it was my son, I would be devastated.”

Davis said his sister called police and indicated that her brother was “not acting like himself.” The man had allegedly been walking in traffic in the 800 block of Broadway before a pair of officers arrived at 2:11 p.m. and found him behind a restaurant, he said. He ignored multiple instructions from an officer and “concealed his hand in his pants pockets,” Davis said. The man paced back and forth as the officers talked to him, then “rapidly drew an object from his front pants pockets, placed both hands together on it and extended it rapidly toward [one] officer, taking what appeared to be a shooting stance,” the chief said. At that point, the other officer fired a Taser and the officer who had the object pointed at him fired his handgun, striking the man. Davis declined to say the number of shots that were fired. No firearm was found at the scene.

The man, he said, pointed the object at the officer’s face. 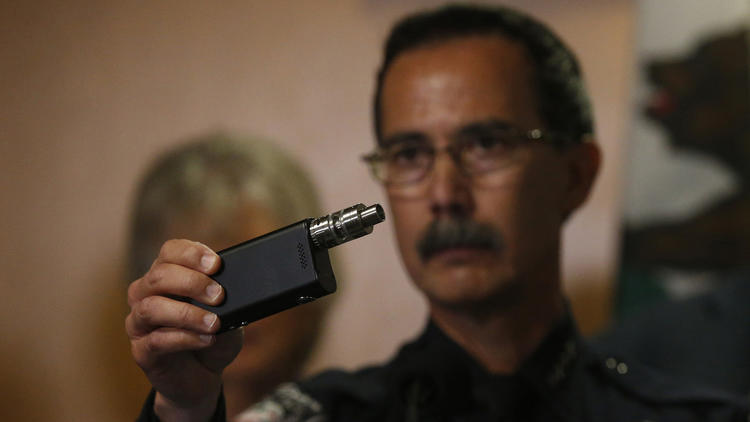 Television news footage of the crime scene showed what appeared to be a vaporizer pen and battery lying in the parking lot beside an evidence marker. Later the chief revealed it was a vape smoking device.

After the shooting, officers provided first aid until paramedics arrived and took the man to a hospital.

A witness to the incident made a cellphone video, which was voluntarily turned over to police. The department has so far declined to release the video to the public.

A Facebook page for Alfred Olango identifies him as a head cook at a Hooters restaurant and that he is originally from Uganda. It says he went to San Diego High School and studied at San Diego Mesa College.

Hours after the shooting, protests erupted in the San Diego County city, with friends of the man’s family saying he suffers from a mental illness and did not pose a threat to the officers. Most of the demonstrators voiced concerns that the shooting was racially motivated.

By 1 p.m. the next day, a crowd of roughly 100 demonstrators had marched from the police station to the scene of the shooting several blocks away, as a cordon of roughly 25 San Diego County Sheriff’s deputies stood nearby. The deputies wore riot helmets and held long wooden batons at port arms.

During the march, protesters momentarily blocked traffic at the intersection of Magnolia and Main streets downtown. As car horns honked, either in protest or frustration, the demonstrators chanted “black lives matter” and thrust their fists in the air. Their foreheads dripping sweat under an unrelenting sun, activists held signs that read “release the 911 call” and “No justice, no peace!” — a rallying cry heard at similar protests throughout the nation.